Yes, finding lodges that allow children on the drives and have activity programs, minders and games for the kids is important, but the right guide is essential too.

He/she needs to be able to communicate and relate well with the whole family especially the children, because if they aren't having a good time it could potentially spoil the whole experience for everyone.

The field guide below has a wealth of experience guiding South Africa family safari trips, combined with advanced nature, trail, tracking and birding qualifications, making him the ideal choice to lead your family safari. 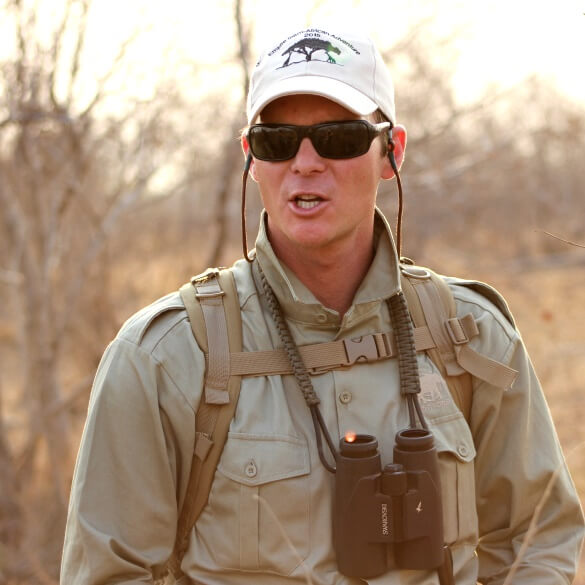 I was born to be a Safari Guide, spent my childhood in the "bush" being mentored by my father a passionate birder and photographer and now a breeder of endangered game species.

Many of my family including uncles, aunts and cousins worked in the safari industry and I was inspired from a very young age. This was always what I wanted to do. I have a natural passion and keen interest in and for nature.

A passion for nature, conservation and preservation for me is key! Then comes people skills, as well as an encyclopedic knowledge of natural history and great interpretation skills, of animal behavior as well as interpreting this information to the clients.

Stopping a group suddenly one afternoon, I could hear the distress calls of a Buffalo, it was definitely Lions killing a buffalo. We sped into the area in the land rover, searching, stopping and listening.

There it was again, we were close now. We came around a bend on the corner of a river, and found my friend and fellow guide, demonstrating to his guests with a piece of pvc pipe what a buffalo sounds like with a lion on its back. Anyway we found the source of the noise! Ha Ha Ha!

There really are so many over the years, in loads of different national parks in different reserves and countries.

Today the first that springs to mind is a pack of wild dogs, or African Painted Wolves (Lycaon pictus as I prefer to call them), versus a clan of Hyenas in a war over a Nyala antelope which the Wild Dogs had caught.

Hyenas arrived five minutes after the kill was made, they could hear the excitement of the painted wolves as they ate, five adult wild Dogs and probably five pups or so.

One Hyena, then two, then also about five or so, the hyenas took over the kill and started feeding, the wild dogs were going crazy, chattering and snarling, tails, canines, dust.

Another few adult wild dogs arrived and things went crazy. They outnumbered the hyenas maybe nine adults to five in the end. They caught a big female hyena against a steep embankment of a small dry river, and they killed her.

Most probably seeing a herd of Elephants in northern South Africa along the Limpopo River walk up to the carcass of another elephant and mourn for about 15 minutes.

The elephant had died very recently and the others, stood around in silence, for minutes at a time, not a single elephant even moving an eyelash or a tail or anything. It was deeply emotional, deeply spiritual.

The time an elephant nearly stood on us, on purpose...but its only for around a camp fire!