Kenya is an amazing destination for a honeymoon safari for a whole host of reasons, but especially the excellent field guides like the one listed below. 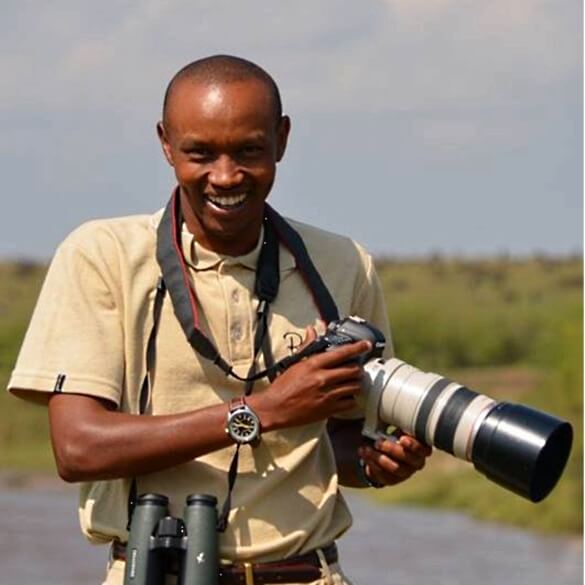 Go on a Kenya honeymoon safari with this guide
QUALIFICATIONS EXPERIENCE

My passion for conserving nature started when I was a young boy, where I kept speckled pigeons and would sometimes join other boys in search of dikdiks and reedbuck. I also engaged in collecting porcupines quills and birds feathers.

After school I studied to become a guide and sat for the bronze level Kenya Professional Safari Guide Association (KPSGA) exam in 2007, silver level 2010 and attained gold level in 2016.

A good guide is the one who is passionate, knowledgeable and more important respects people and wildlife, also an entertainer.

I was once embarrassed when I went to usher in/receive a diplomat at the airstrip, he was supposed to be an ambassador and his wife according to our Booking Chart, we followed the protocol and for half an hour I gave the couple a dignitary treatment (as per our company policy) only for them to open up and tell me they were actually on a Kenya honeymoon safari whose trip was funded by their parents.

I had no option but to give them a dignitary treatment for the entire trip.

Well, after spending several year with wild animals, I find all animals unique in their own way, but I must confess to getting goose bumps with excitement every time I see a cat.

I have several memorable sightings but one day were watching a single hyena stroll casually in the grassland plains of Maasai Mara, it was around eleven in the morning so normally you would expect hyena to be in bed at that time since they are mostly nocturnal.

She disappeared into a thick croton bush and as we were getting ready to continue with our drive, we heard a commotion and a young Black Rhino shot out the bushes, literally flying.

Luckily my guest was ready with her camera and she got a super shot of what up to date we call, "the flying rhino". The chase lasted for a minute and then the hyena sobered up and realized it was mission impossible.

We were on a morning drive and we pulled under a Desert Date Tree to have our picnic breakfast only to find a lion cub (around 10 months old) lying dead.

My guest and I were doing an autopsy when I peeped through my binoculars and spotted a pride of two lionesses plus three cubs the same age as the deceased walking towards us. Immediately one of the lioness whom we confirmed was the mother started to feed on the carcass and sooner rather than later the whole pride had joined in the feast.

A few cars joined us but the majority of the guests could not bear to watch so they left, but my male guest insisted we watch the whole episode. We gathered from other guides that the pride was feeding on a warthog the previous evening but the deceased had a bone stuck in her throat.

Within an hour or so the carcass was cleared, which left us with many questions, so we decided to share our pics and story with the Lion Project guys who interestingly had not documented such an incident before. After that I said no thank you to breakfast that morning but my guest happily devoured our picnic.

My boss (regional head guide) had paid a visit to our camp and as usual the guides help the managers in hosting from camp fire to the dining table, so I was on duty that night as a Kenya honeymoon safari host guide.

We had a nice clear sky, just the perfect one for campfire and the guest were all jovial and chatty while drowning their Gin & Tonics, Lagers and Chardonay.

Out of the blue my boss started a chat on snakes and the chat snaked through the entire group, within less than 10 minutes of conversation, alas we thought a python come and swallowed all the guests leaving only my boss and I.

The rest of the group had snaked their way into the dinning area. Lesson learnt, never mix snakes with Gin & Tonic.