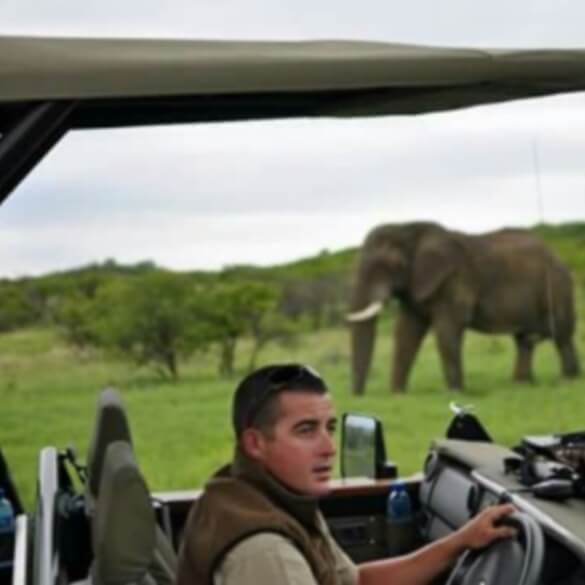 From a very young age, I have had a fascination and love for nature. I think this is due to our family vacations that were spent mostly in the bush or the mountains.

As a got older I took a very keen interest in reptiles and decided that once I finished school I'd do a degree in herpetology but unfortunately no such course were available to me at that time.

Later on, I heard of FGASA and Ecotraining and did some research into the guiding industry which got me so excited to start a career as a guide in Africa.

Once I left school, I registered for a two year course to study Game Ranging and Wildlife management with Intech College and after I completed the theory, I had an opportunity to do a FGASA lvl 1 course through Ecotraining which I did at Karongwe with Rob Francis in 2007.

The course opened my eyes to a whole new world and once I completed it, I knew that being a guide was exactly what I wanted to pursue as a career in life.

Unfortunately, I was too young at the time to apply for my PDP (large vehicle driving licence) so I got into hospitality working in Hotels, restaurants and bars until I was old enough to apply.

Soon after gaining my PDP I knew I had to get back to the African Bush and there was no better way to do that than to register myself for a two weeks survival course in Botswana for Ecotraining which I did and truly incredible it was.

Once I got back to KZN I started looking for a job as a junior guide but as with most companies, experience is a must so it was difficult to get my first foot through the door but with education and persistence an opportunity presented itself to me at Tala Game Reserve which I took with both hands.

I stayed at Tala for three years before coming through to Nambiti which is currently where I'm working at.

A good safari guide is a person who has an undying love and passion for nature and whose wanting to learn and further improve his knowledge of the African bush as well as not letting your ego get in the way of the safety of the guest as well as the experience.

YOUR MOST EMBARRASSING GUIDING MOMENT?

Falling out of an Acacia tree to get my rifle to stand down a male lion in full view of my guests. Needless to say that when I got back to my cruiser, my legs were like jelly so I couldn't drive for some time after the encounter.

Was watching a coalition of three male lions bringing down a massive eland bull three metres from my cruiser in Nambiti.

It was incredible to watch the coordination and power of the males as well as the strength of the eland bull as it carried the males on its back for some distance fighting for its life before it was taken down.

My favorite animal would have to be snakes, mostly the Adders and Vipers, everything about them fascinates me.

Mammal wise, I have to say the honey badger mostly because of the respect they get from larger mammals including lions and also the way in which they can flush snake venom out of their body just by taking a short nap.

I wouldn't say that I specialize in anything but I have a very keen interest in reptiles and photography.

When I think about animal behavior, two things come to mind. First being two nyala bulls having a show off of good looks. Second, the male ostrich displaying to the females with his unique dance moves.

My favorite camp story in Nambiti would have to be old Zulu story about how the zebra got his stripes.

HERE'S WHAT PEOPLE HAVE TO SAY ABOUT THIS GUIDE...

We have grown up in South Africa and know a little bit about the bush. But during our recent trip this guide took our knowledge and appreciation of African wildlife to a new level. He was truly exceptional and our experience would not have been the same without him.

He was quick to answer all of our questions and was genuinely committed to imparting his love for nature to us. His confidence and experience allowed us to feel safe while still getting us up close and personal with the wildness of the reserve. He is a fantastic driver and is not afraid to take the road less travelled (even in reverse) to get us the best view.

He kept us entertained and his experience in the hospitality industry really made us feel comfortable and welcome. I'm sure that he is going to be hugely successful wherever his career takes him. With him as a benchmark it is going to be difficult to plan our next safari!

This is the best safari guide around; he was so knowledgeable and made everything fun (especially the bush walk).

I've recommended him to people who are going to book up, just to be guided by him. If he ever works anywhere else but Nambiti, I’d definitely go and visit!

We recently spent a 2 night stay at the amazing Nambiti Hills. We were very fortunate to be paired with Kingsley Biddington as our guide for the stay of our trip. 'Kings' was incredibly friendly, welcoming and extremely professional throughout the 4 drives we went on.

His knowledge of all the game and bird life was second to none and there was not a question he could not answer for us. He also seemed to have an amazing ability to find us the game we were looking for and track their movements and know what they were going to do next.

You can see that he is so passionate about what he does and this is not just a job for him, it is his way of life and you can see the joy he gets from being in the bush and with the wildlife. I cannot recommend Kingsley enough and just a massive, massive thank you to him for making our trip so memorable.

We stayed at Nambiti Hills Lodge for three nights and were able to enjoy six game drives with Kingsley. His knowledge was exceptional in all respects and he was always happy and patient to answer even the most inane questions. A wonderful and memorable safari.

Kingsley was courteous, friendly and responsive right from the start. We had six safari drives with him and each time we felt extremely satisfied with his uncanny way of spotting camouflaged animals from huge distances and taking us right in to the action with the minimum of fuss.

His knowledge of the animal world was both wide and deep. As a group of eight from three different countries we were constantly firing questions at him even as he took the vehicle down some impossible tracks. He always answered clearly and authoritatively, keeping it refreshingly concise unless we asked for more detail - in which case he was happy to provide it.

Whenever we passed vehicles from other lodges he was always helpful, telling the drivers where our most exciting sightings had been.

His enthusiasm was infectious and we thoroughly recommend him to anyone who is seeking an extremely good guide. The lodge itself was very well run and we couldn't fault the food or the service - but Kingsley made it a satisfying adventure. Do ask for him if you have a choice!

We have just returned from an incredible visit to Nambiti and we were fortunate enough to have Kingsley as our guide, what an absolutely wonderful experience.

He has an incredible knowledgeable about the bush, the animals and the country, what an amazing education for us all. A total delight to have him as our guide, he certainly went above and beyond! Thank you.