Experience the rich and unique heritage of people and wildlife that a trip of this kind offers with one of the guides best suited to lead it. 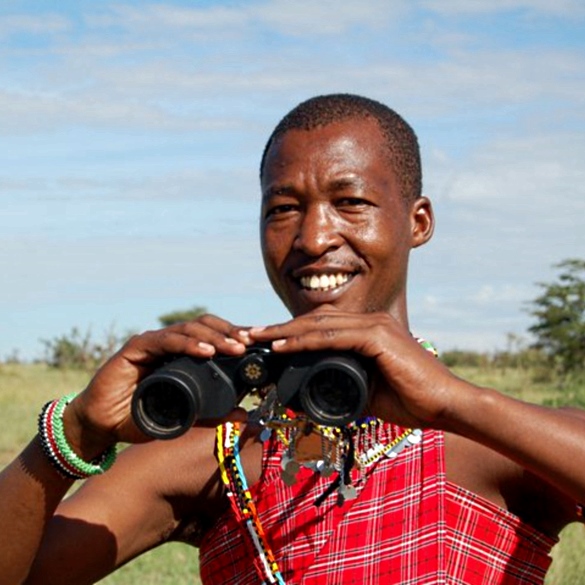 Go on a Kenya cultural safari with this guide
QUALIFICATIONS EXPERIENCE

I was born in the Lemek Conservancy near the Masai Mara National Reserve and grew up surrounded by wildlife. From an early age I was fascinated by birds and animals.

This passion for wildlife was deep within me from my earliest childhood memories and developed. When my parents moved to the Loita Plains, a birthing ground for wildebeest I decided I wanted to become an ambassador for wildlife and thought becoming a guide was the best way to do this.

When the Koiyaki Guiding School was started in our area I saw my opportunity to be academically trained in what I always longed to do.

Firstly, you must be a peoples' person who connects well with all sorts of people. Its not just about communicating with your guests in and interesting way, but also getting to know them and their world. Understanding and sharing animal behavior brings sightings to life.

Obviously you need to have the required knowledge as well as practical experience of wildlife - a good guide is always learning new things! A guide is an ambassador for wildlife and conservation, peoples' customs and culture as well as your country.

Without passion to introduce people to the wonders of wildlife you will never succeed in enriching your guests lifetime experiences.

In my first year of guiding, I was taking a group of clients to see wildebeest crossing on the Mara River and because we arrived late there was no good viewing point.

They got out of the vehicle to make sure they could see well and would not get back into the vehicle when I told them to. This resulted in stopping the crossing and spoiling the occasion for everybody else.

This taught me to be stronger about Kenya cultural safari clients listening to instructions when they are in the bush.

The Leopard overwhelms me with its beauty - the stunning yellow eyes, the impressive coat with its spotted pattern. It is the most widespread, but least seen of the larger cats. Its power and hunting techniques as "the silent hunter" are fascinating.

This was what I speak of as a Masai Mara Massacre! I set out very early to take my clients to see a river crossing.

As we arrived we saw thousands of wildebeest on the far bank waiting to cross. There were 11 lionesses on our side of the river close to our vehicle hiding a thicket.

The lion remained hidden while hundreds crossed and then all of a sudden one pounced and brought down a wildebeest. The others followed and there was chaos: dust, struggling and loud moaning as the lionesses carried out their slaughter. At the end we counted 17 slaughtered wildebeest.

Seeing some impala running I looked through my binoculars expecting to see a leopard, but instead saw a baboon carrying a baby impala.

Then a large warthog attacked the baboon hitting it in the stomach. The baboon dropped the impala and the warthog ran off with it and started eating it. Then the baboon chased the warthog and grabbed the baby impala rushing away and up a tree with it.

Although baboon are known to like young impala because of their taste for the curdled milk in their gut, warthog are not known to be carnivorous in any way.

How the Maasai Got Their Cattle...

One day long ago, God (Ngai) called Maasinta (one of the very first Maasai) and told him to go and make a very large enclosure and tell Him when he had done so. Maasinta did this and reported back to God. Then God said " Tomorrow early in the morning I want you to go and stand against the outside wall of your house, for I am going to give you something called cattle. When you hear or see anything do not be surprised and keep silent.

The following morning as Maasinta was leaning against the outside wall of his house he heard the sound of thunder and God released a long leather thong from heaven to earth. Cattle descended down to the earth and the earth shook so violently that Maasinta's house almost fell down.

He was afraid, but did not move or make a sound as thousands and thousands of cattle were still descending. Dorobo who was a friend living in Maasinta's house woke up with the shaking and loud noise - he went outside to see the countless cattle coming down from heaven. He was so startled that all he could say was "ayieyieyie!"

On hearing this, God who had commanded reverent silence stopped the cattle descending and asked Maasinta "are there cattle enough for you?". Then God said to Maasinta "I will never do this again. You have to love these cattle in the same way that I love you." That is why the Maasai love cattle so much. 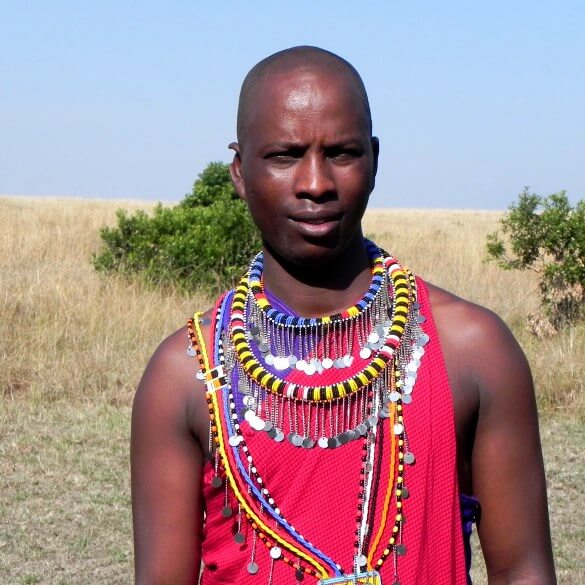 Go on a Kenya cultural safari with this guide
QUALIFICATIONS EXPERIENCE

I like wildlife very much and it has always been my ambition to do something around them.

I was first employed as a night guard and help the guides on nature walks in one of the camp in Masai Mara then the manager noticed my passion about wildlife and was given a chance to train as tracker and later a guide.

A guide who cares for nature, interprets it well and respects his guest.

Hyena - I like their matriarchal system of life where the female has higher testosterone than the male and is head of the pack. Also being cleaners of the ecosystem by eating all the bones.

Seeing 15 Thomson gazelles crossing the Mara river during the migration and 14 of them being killed by crocodiles in the water. One made it to the other side of the river only to be killed by a leopard on the river bank.

And then on another occasion I saw two honey badgers with a baby fighting and chasing four lions away from their den.

A legendary story, which my father believes to be 100% true, telling of the reason why Maasai don’t eat meat.

The legend tells of a time of drought throughout the Maasai land, and Maasinta the founder of the Maasai people prayed to Enkai (God) asking for relief, which came in the form of coloured cows falling from the skies!

But to know how the story ends, you will have to come on safari with me!

Share your impressions of your own Kenya cultural safari here...