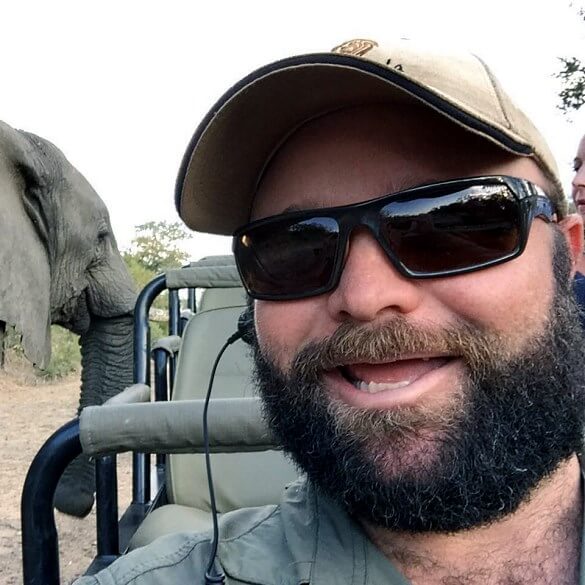 I guess it's from my exposure to the bushveld from when I was a child, on school holiday's my parents would take us to the Kruger National Park instead of the stereotypical trips to the coast. Growing up in Ladysmith I also had the Drakensberg close by for a quick escape to the outdoors.

I'm also a very keen fisherman and being so you are always out by a dam or river in the bush somewhere, so when the time arrived and school came to an end I guess it just came naturally to pursue a life and career in the great outdoors.

And where better to start other than the Timbavati after one year of intense training at Bush academy close to Thabazimbi in the Limpopo province.

A good safari guide in my eyes is an individual who will go the extra mile for his guests out in the bush and cater for all their needs, especially working hard to get a good view of the species that person wants.

Be humble, friendly and above all, kind and polite at all times. Treat people with respect and once all of the above is in place the adventure out in the bush on drive will be so much more rewarding.

All in all you can be good in the bush, but if you're not good with people it will be an unbalanced experience.

YOUR MOST EMBARRASSING GUIDING MOMENT?

We had a bush cake event, it was someone's birthday and we did the whole setup and everything was perfect, but as soon as the guest arrived I realised that I had forgotten the cake at the lodge.

Have had too many for me to choose only one. There was the time I saw a pride of lions killing five buffalo in the space of about thirty minutes and also a battle between a brown snake eagle and a big black mamba which the bird won after about forty five minutes.

I enjoy everything about guiding really but I especially like the survival and botany aspect.

I once witnessed two lioness killing a nyala bull and when the rest of the pride arrived on the scene to join in on the feast, a herd of elephant came around to see what all the commotion was about.

The lions scattered in every direction and the matriarch of the herd picked up the remains of the carcass and lodged it safely in the fork of a fever tree, standing guard over the meat for a few minutes.

She then drifted off slowly with the herd leaving the lions behind without any way of reclaiming their meal. 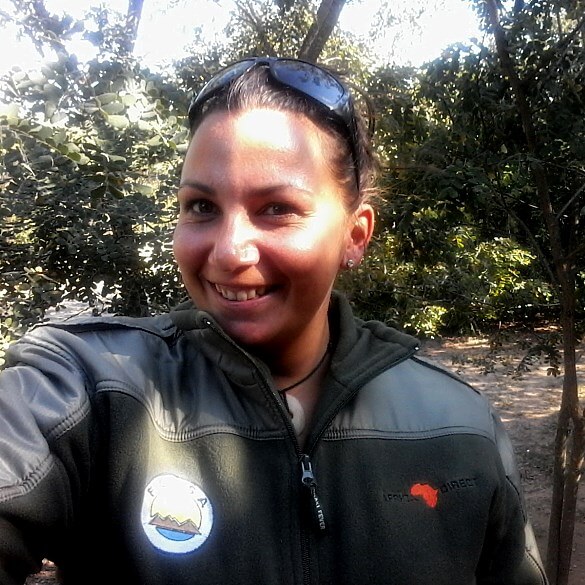 WHY AND HOW DID YOU BECOME A SAFARI FIELD GUIDE?

As children we always had to be outside unless time for bed or bad weather.

I was working in Arusha, Tanzania writing grants for a Non-profit for a year before friends of mine said I should try moving to South Africa.

While here I was introduced to the guiding world and have never looked back.

WHAT MAKES A GOOD FIELD GUIDE?

You have to have a love of both nature and people and an empathy for those who you take on safari.

You are a teacher of nature and an ambassador for the wild places of Africa. Knowing how and when to talk in a sighting is important and reading your guests interests.

Showing them things they did not even know they wanted to see and letting them experience the bush through your eyes and passion.

Of the big five lion and leopard. Honey Badger is also a favorite.

MOST MEMORABLE SIGHTING OF YOUR FIELD GUIDING CAREER?

We were tracking cheetah one morning in Madikwe, a coalition of four males, and upon coming to a dam we noticed a plume of dust and chaos ensuing.

We quickly drove around and their they were, the four brothers, trying to take down a full grown red hartebeest.

They were jumping on it's back, typical lion behavior but not typical for cheetah. It took them almost an hour to kill the hartebeest, it was incredible.

I love walking and trails the most and also predator interactions.

One of the most special animal interactions I have witnessed was in Zambia when two yellow billed kites were mobbing a Pel's Fishing Owl out of his roost mid-morning. It was my first Pel's sighting.

Please send in your Thornybush feedback about these guides

The Thornybush Game Reserve is located in Mpumalanga South Africa, very close to the Kruger National Park, but unlike many other nature reserves in the area it's completely fenced and has been since 1955.

It boasts an impressive tally of wildlife, including the 'big five' and cheetah, hyena, hippo, giraffe, zebra and wildebeest, with only the wild dog being absent from the big species list, even though they do occasionally make an appearance after climbing in under the fence.

All told, there are 48 species of mammal to be found, 54 reptile and 280 bird species. Extensive Ground Hornbill research has been done here and if fortune favours you could see African hawk eagles, painted snipes, Jameson's firefinch and Temminck’s courser amongst others.

There are a total of 13 lodges in Thornybush, all of them falling in the luxury category and a few attaining the ultra-luxury epithet.

You will also find ideal places to stay in the family, adventure, romantic, personalised service or classic categories, so really something to suit everyone.

Historically the reserve has the 2nd oldest commercial lodge in South Africa which was rebuilt in 2001, so they have a lot of experience when it comes to quality bush accommodation.

Sunshine with the likelihood of more sunshine is normally the weather prediction in Thornybush. It does rain in summer (October to April) when afternoon thunderstorms are reasonably common, but all day rainfall is rare.

The month with the most rainfall is February with 114 mm (4.5 in) average recorded and the least is June and July with only 7mm (0.3 in) recorded. So the winter months (May to September) are dry with very little rain.

Thornybush is not very big at 13816 hectares (138,16 ㎢) but it packs a lot of wildlife into a smallish area so the sightings aren't compromised in any way.

The closest city is Phalaborwa which is which is 112 km (69.5 mi) away by road. Off-road driving is allowed by the guides in Thornybush to pursue big five species.

Fly to Thornybush Nature Reserve directly using charter flights from an airline such as Unique Air or Federal Air which has a daily shuttle service from Johannesburg landing at the tar airstrip situated in the reserve itself. Flying time is approximately 60 minutes from Johannesburg.

Scheduled flights don't go directly to the reserve and will therefore cost less. Eastgate airport is only a 30 minute drive away and airlines like South African Express fly there daily.

Another option is to take a scheduled flight to Kruger Mpumalanga International Airport (KMIA) and then drive to the reserve which will take about two and a half hours.