If an African trip like this is on your bucket list then these very experienced horseback riders are the guides to use to help you fulfil it. 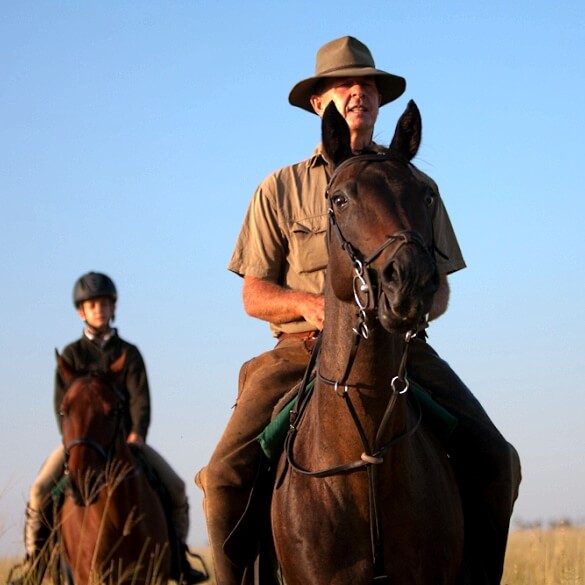 Go on a Botswana horse safari with this guide
QUALIFICATIONS EXPERIENCE

Growing up in Malawi I was fortunate to have parents who loved the bush so every weekend we were either visiting a national park, up a mountain or exploring the shores of Lake Malawi.

After graduating from university in the UK I could not wait to get back to Africa! Buying an old Bedford lorry I spent 8 months crossing the continent.

This was the perfect way to return to Africa and to reacquaint myself with the continent's wildlife, birdlife and people. On this first "safari" I realised I wanted to pursue a life in the bush.

Passion. Only with passion can you bring the bush alive for your guests.

A hot day and a break at the famous Chapmans Baobab. Time to move on and after un-tethering eight safari horses and mounting up the guests I jumped onto my horse and said 'lets ride'. Only to realise I had not untied my horse!

The horse of course. If you love the wildlife and space of Africa then there is no better way to experience it than on a Botswana horse safari.

Between the endless white expanse of the Makgadikgadi Pans and the Kalahari woodlands lies miles of the most beautiful grasslands.

Mounting up before sunrise we set off across these grasslands stretching away into the distance. It was just us and our horses in this extraordinary environment.

As we picked up the pace into a fast canter, hundreds of zebra started streaming out of the woodlands. Alerted by the thundering of our hooves they thought we must have been fleeing from something so decided they must flee too.

As the sun rose the thrill of moving at pace and feeling part of, at a guess over three thousand zebra is an emotional experience I will never forget. It felt like the Africa of old.

Riding in Malawi we spotted a honey badger who, as we approached closer suddenly rolled over onto his back and died!

Dismounting I approached this infamously aggressive of creatures with a stick. Not a movement from the honey badger so I poked it gently under the chin with which one eye opened staring straight ahead accompanied by a low menacing growl.

Honey badgers can play dead! I have subsequently read that this is not unheard of but why such a fearless creature would need to behave in such a manner is beyond me.

At the end of a long day in the bush the most enjoyable conversations follow reminiscing about all that has been seen and experienced.

It is such a privilege for all of us to still be able to experience such wonders of the natural world but it is also important for visitors to Africa to understand the threat the wildlife of Africa is under. As you sit under the stars, conservation is a fascinating subject to tackle around the campfire.

But there are also many light hearted moments around a botswana horse safari to share - such as when all the horses came in for their breakfast but milled around and refused to enter their stables.

Very strange until we realised a hyena was enjoying the warmth of the wood chippings in one of the stables. It took some effort to persuade him to leave! 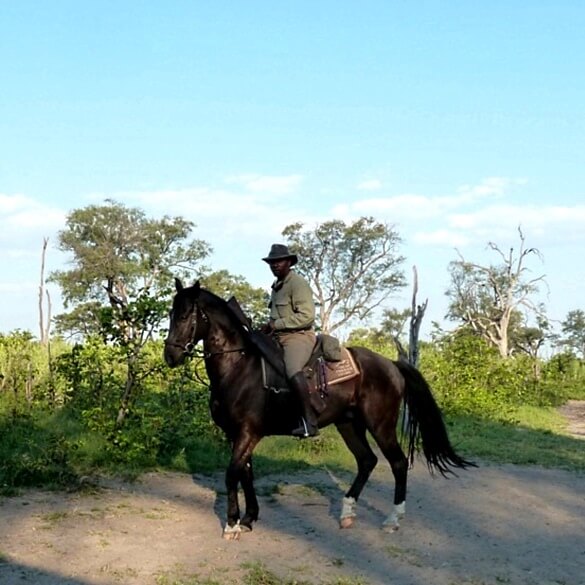 Go on a safari with this guide
QUALIFICATIONS EXPERIENCE

I had a passion for wildlife from my earliest memories, I particularly enjoyed the wildlife club whilst I was at school. I learned to ride donkeys as a young boy, as is commonplace for boys in Botswana, and progressed onto horses working cattle with them.

Becoming a safari guide seemed like the obvious route and being able to guide from horseback was the clincher and I haven't looked back. The Okavango Delta is a truly diverse area and to give a guest the full experience you need to be able to guide from vehicle, foot and boat, so whilst guiding a Botswana horse safari is, in my view the ultimate way to become part of the environment, I also enjoy guiding by the more standard methods!

You have to love what you do! Everyday I feel lucky to be able to go out into one of the most pristine wildlife areas in the world to share it, explain it and be constantly amazed by it.

You have to be a real people person, every guest is different and the dynamics of groups are ever changing. Riding adds an extra element, as you have to consider the horses as well; having a lead horse that you trust is a very special feeling.

The most rewarding times are when the guests are as excited as I am by the wildlife interaction that they are viewing, whether it's following a honeyguide or seeing a lion kill.

I am known for my ability to mimic animal calls, one evening after all the guests had gone to bed I heard a lion calling a short distance away from camp. I decided to answer him.

Little did I realise that I must sound just like a very attractive female because shortly afterwards he was patrolling around my tent looking for the lioness who had obviously suggested that she might be interested in him. I am now super careful about when and where I decide to roar!

Picking a favourite is hard, in terms of predators it would have to be African Hunting Dogs, their skill as coordinated hunters and their pack mentality is a joy to watch.

Each Botswana horse safari brings some unique sighting; possibly the most memorable was a recent leopard. We almost cantered past him; he was relaxing in the long grass on the edge of an island.

He lay happily whilst we were able to take photographs of him in the background with the horses and the guests. Suddenly we heard a strange, almost rattling noise in the bush, the leopard got up and started to stalk through the undergrowth, there was a young porcupine and its mother.

The leopard went straight for the youngster catching it despite the huge pointed quills, as with all cats he start to play with his pray, the mother attacked to distract him and the young porcupine got away, disappearing down a hole.

Not to be defeated the cat threw himself into the hole in pursuit, he came out with quills in his face, chest and paws, but triumphantly he had the young porcupine, this time he wasn't going to make a mistake and he got his meal. We left him carefully removing quills, young porcupine must be delicious to put up with all that needling.

Not every piece of animal behaviour is written in a book, I was fascinated to see an elephant bull chase a pride of lion off a buffalo kill.

The elephant returned to the dead buffalo and tried to get it onto its feet by putting its tusks under the body and levering it up. It was almost heartbreaking to watch.

I think that most guests enjoy hearing about life in the bush, and how much my homing skills have improved since I got lost out there as a child for 18 days, living on wild berries and drinking water from stagnant pools. 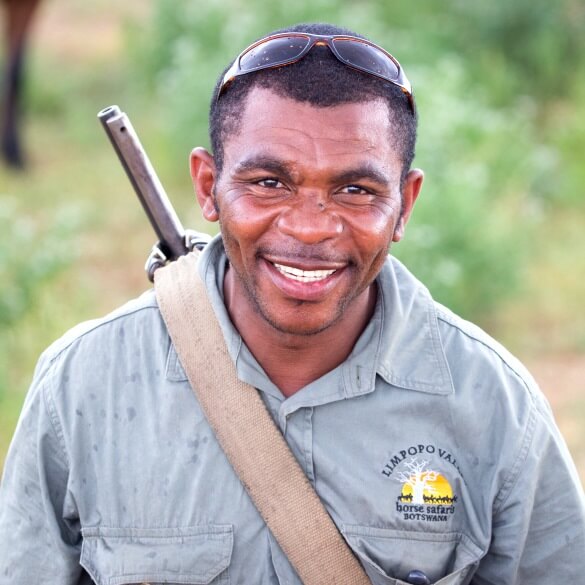 Go on a safari with this guide
QUALIFICATIONS EXPERIENCE

It’s a long story, I was first a groom due to my love of horses and then I worked my way up.

I took riding lessons and then my interest in guiding took me to Eco Training to gain my level 2&3, as well as rifle handling and guiding walks and then I worked my way to becoming a horseback safari guide.

Obviously this is a tough question. It takes a good rider who has a love of horses, to be passionate about riding and horses, as well as their behaviour and nature and to look after the welfare of the horses.

When I fell off my horse!

Birds, I just love them.

There are lots of them. When I was stalked by a lion and so I had to turn my horse around to stare it down and then it went away luckily.

When we were watching some elephants and some zebra nearby started running around in an unusual manner, strange behaviour for them and then we realised it was because just a short way away a cheetah was chasing and then caught an impala.