The unpredictable and sometimes high-risk nature of a walking safari means the guides who lead them need to be well trained and experienced to ensure the safety of participants.

And they also need a broad sweep of knowledge about the animals, insects, plants, trees and tracks you will come across on the trail, to be able to describe and explain them to you adequately.

So it really pays in peace of mind and in the quality of your experience to go with the very best trails guide you can find. I've done the legwork for you and tracked down some of the top walking safari guides in Africa and listed their biographies below...

(*pppn = per person per night spent on safari in US dollars) 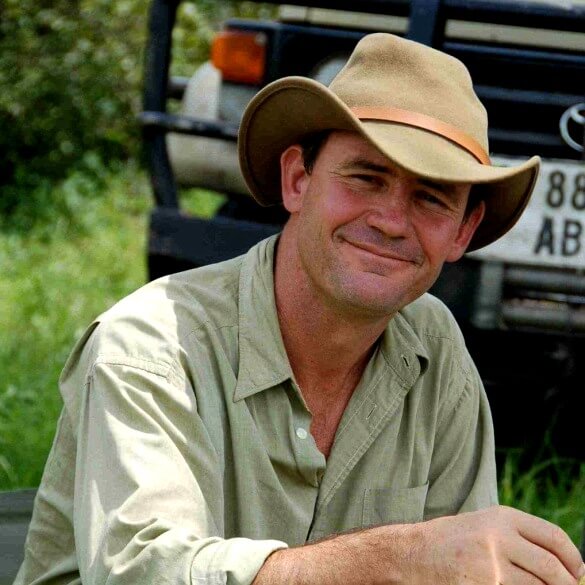 Go on a walking safari with this guide Rates : $800 and higher pppn*
QUALIFICATIONS EXPERIENCE

In the late 80's, I was living in Istanbul Turkey, working as a teacher. It became apparent that this wasn't going to work for me as a career.

At that time, a friend of mine, who was working as a guide for a US-based adventure travel company, decided to head back home - and he recommended me as a replacement. Despite serious misgivings, I decided to give it a try and loved it.

It's 90% personality - you have to enjoy being with people and be able to adapt to different characters and situations. In fact, you need to be a bit of a show-off (but not too much).

You need to be passionate about the job and have an inquiring mind, so that you're constantly learning about wildlife & conservation - otherwise you get stale.

Oh, and a sense of humour, as that gets everyone through the day.

I have a huge soft spot for cheetah, something to do with their vulnerability.

But favourite? Elephants, hands down. You can tell at a glance whether they are stressed about something or calmly enjoying life. They are brave & loyal & playful… in fact they embody some of the most important human qualities.

Elephants are endlessly fascinating to watch.

Hmm tough one, but just last week, while on a walk, we came across a honey badger rolling and writhing on the ground. I quickly realised that it was in a bad way, dying in fact - possibly from snakebite.

While we were watching, I heard a buffalo bellowing in distress. We moved quickly towards the source, and found 3 lions that had just brought the bull down and were in the process of suffocating it.

Meanwhile, the ranger accompanying us, spotted a lone Wild Dog. We tried to find it later, but it had disappeared. Not too shoddy for a 2-hour walking safari!

'Over there folks: a herd of elephant… oh hang on - they're female ostrich'. 5 mins later: 'Ostrich up ahead. Errr, I mean elephant…'

In July, I was guiding in Mahale Mountains NP, western Tanzania. We were watching a female chimp, Khadija, with her infant when she picked up a small twig and started moving purposefully through the forest.

Mwiga, the camp guide based at Greystoke, told us she was going fishing for ants. It was fascinating to watch how she carefully inserted the twig into a Carpenter Ant hole, then drew it out and licked off the ants that had flung themselves onto the 'intruder'.

What is truly amazing about this behaviour, though, is that it is unique to Mahale: in other places (including Gombe Stream, a bit further north on L Tanganyika) chimps fish for termites instead.

In this, and other behaviours like it, one can see the beginnings of culture.

The walking safari. I enjoy the whole spectrum of being on foot in the bush, from the very small to the biggest of the five. But I am really a generalist, dipping my toes into all areas of guiding.

"So, where is this creature?"

"But this is the mammal book. You need to look in the bird book."

As told by a colleague, from his own experience. 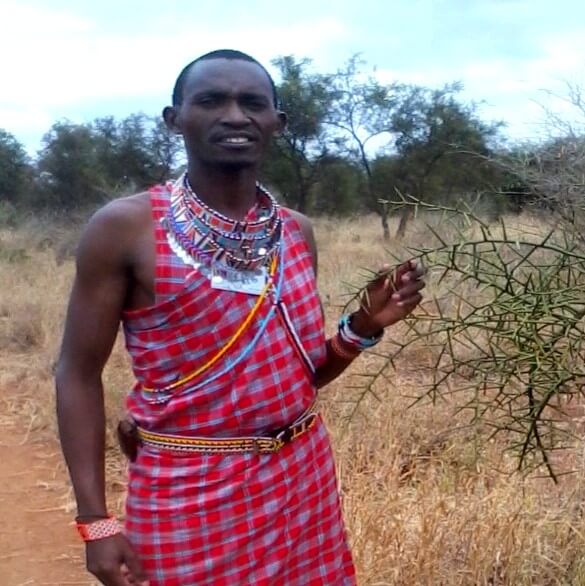 Go on a walking safari with this guide
QUALIFICATIONS EXPERIENCE

I became a guide through friends who I met before joining the industry. Growing up in a village with close encounters with wildlife, led me to have an interest in wildlife.

I wanted to bring change in the community and make people understand how to co-exist with wildlife in a beneficial way, instead of for instance killing valuable lions to initiate young morans into adulthood.

One day I took some tourists on a game drive and the whole day we did not spot any Lions, the guests really complained for this, though in the wild spotting any of these animals is never guaranteed.

I also feel embarrassed when clients do not follow instructions given whilst in the parks/conservancies.

I like Elephants a lot. Elephants never forget, they are always playful and entertaining.

They are many memorable sightings; here are a few that stand out:

I am knowledgeable in both mammals and birds. Going on a walking safari is my best part of educating clients when I'm not driving.

It was fantastic, one day I saw an elephant picking up a small stick and use it to scratch the inside of its ear, it left me amazed!

An African story. The hare and hyena were once good friends. They both had their mothers. One-day hyena asked the hare if they could kill their mothers and it was agreed, but the Hare tricked him and did not kill her mother.

Instead she took her to hiding place far from their normal home. One day the hyena realized that the hare did not kill her mother. He went behind the hare without letting her know that he was trailing her behind. After knowing it he come back alone and killed her.

The hare later went and found that her mother had been killed by his good friend hyena. He promised to teach him a lesson. One evening the hare told the hyena how the witchdoctor told her what to do so their cows could multiply.

Out of curiosity hyena asked her how. We are going to light the fire and before the flames come up I will jump the fire eight times and then because you are big you will jump eight times when the flame is up.

The hyena quickly agreed and the hare started and finished well but the hyena got tired and fell into the fire and he was burned into ashes!

It teaches us lesson that not all your friends are good friends!